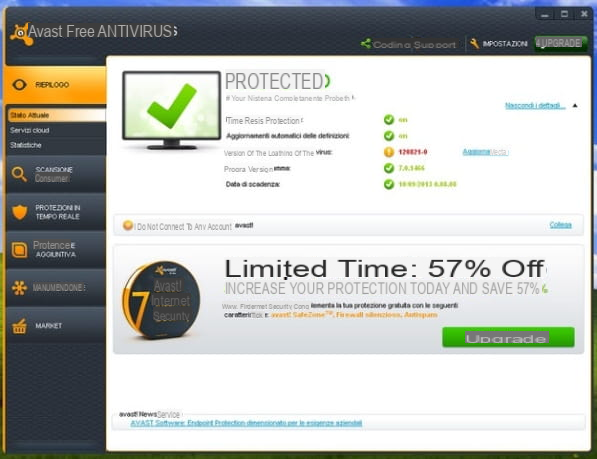 The best programs to eliminate viruses.

Microsoft Security Essentials is one of the best programs to eliminate viruses free agolable for Windows. It is light, fast e, precisely because it was developed by Microsoft, it integrates perfectly with all major versions of Windows ensuring complete protection against viruses and malware of various kinds. It allows you to set scheduled scans to check the system status automatically on pre-established days and is equipped with very effective real-time protection.

Avast è one of the most popular free antivirus in agolable for Windows. It has a very nice user interface and a very fast scanning engine. It allows you to effectively and efficiently protect all areas of the system, from Internet browsing to local files, through P2P and instant messaging, with an extremely customizable modular system. Its database with antivirus signatures is updated very often. To use it, you need to request a free online registration code that can be renewed year after year at no cost. Download from here.

Although in the latest versions it has failed to convince as it did in the past (thanks also to the fierce competition), Avira AntiVirus remains one of the programs to eliminate viruses most reliable agolable on Windows. Its free version offers a very good level of protection in real time but does not include email scanning and has some problems with antivirus definition updates, which are sometimes not downloaded due to server clogging.

Until a few years ago he was one of the leaders in the panorama of programs to eliminate viruses free, today it has lost some of its appeal but remains one of the most reliable PC antivirus protection products. We speak of course of AVG which is agolable in various versions, free and paid. The free one is very light, quite effective and guarantees a quick system scan, but it does not include all the advanced features of the paid ones.

clamav it's a free and open source antivirus agolable for all major platforms, not only Windows but also Mac OS X and Linux. It is not as effective as other antiviruses in this review but it is the ideal solution for OS X and Linux users who need to share files with Windows users and want to check their security. It does not have a real-time protection module and is agolable in various versions: the most famous are ClamWin for Windows and ClamXav for Mac OS X. Download from here.

Malwarebytes Anti-Malware it is not a real antivirus but an anti-malware software able to check the health of the computer and eliminate various types of malware, such as worms, trojans, rootkits, rogues, dialers, spyware, and more. It is agolable in two versions, one free and one paid. The free one doesn't have real-time protection and doesn't include some advanced scanning features. It is very effective, it can detect some threats that often escape traditional antivirus, and its anti-malware definitions are updated very often. Download from here.

How to get rid of viruses from your PC

How to eliminate virus free

How to delete files completely

How to delete temporary files